Take collaboration to the next level – Modularization with EB GUIDE

Within the EB GUIDE 6.8 release, we introduced the first step towards modularization – namespaces. Namespaces enable you to split your model into smaller pieces to organize it and work together simultaneously on different parts of your model. Check out the blog post about namespaces.
This was just the beginning of working on smaller sub-HMIs, in different teams at the same time and still contributing to one big project. This way of working was often requested to be supported by EB GUIDE 6 and we’re proud to introduce you to the concept of model interfaces.

What is a model interface?

Model interfaces enable you to use datapool items and events within multiple models. These elements are the connection between several sub-HMIs during runtime.
Sounds familiar? You’re right, this could be achieved in EB GUIDE 6.8 by connecting EB GUIDE GTF instances via IPC.
Within this release we simplified the management of multiple models especially for you, the modeler.
Additionally, you can create and use as many model interfaces as you need to create a fully enhanced HMI. 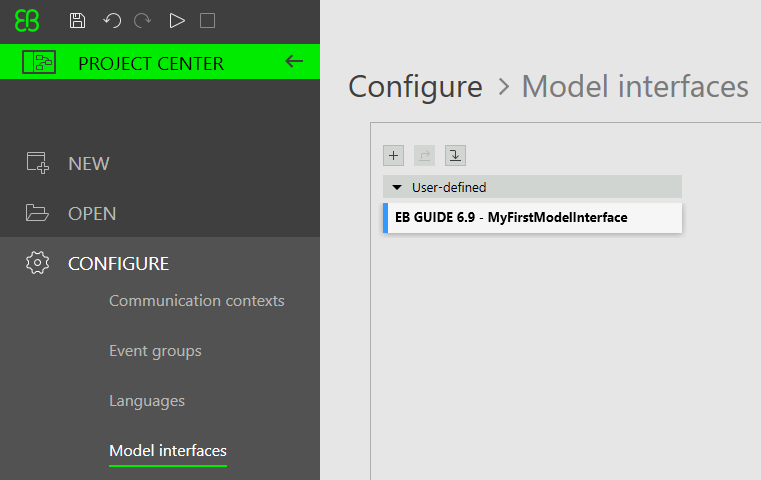 For a better differentiation, you can allocate a specific color to each model interface. This is also reflected wherever model-interface-related elements appear in your model.

To define a model interface, you have to add model elements to it. Select one or multiple datapool items or events in the respective component and add them to the desired model interface using the context menu. You have the freedom to add an element to several model interfaces, just as you need it in your project.
To easily distinguish an element that has been added to the model interface we added a visual differentiation.

The number of elements added to a specific model interface is also reflected in the project center.

It is added to the section of imported model interfaces. Additionally, it is tagged with a hatched marker in the allocated color of the source model. This helps you to quickly recognize imported model elements.

Imported model elements can be referenced in scripts and you can also link to datapool items from every compatible datapool or widget property.

“What happens if a model interface I imported changed?” – you might have asked yourself. No problem at all, just import the model interface again and it will be updated. EB GUIDE creates a list of all changes, which will be generated automatically.

We hope these improvements will help you achieve your daily goals with EB GUIDE more efficiently and intuitively. If you have any comments and suggestions concerning UI/UX, feel free to contact us at uxd_support@elektrobit.com.

As always, the following resources have been updated and are now available:

Read through our updated Release Notes.

Sign up for one of our EB GUIDE training courses now.