EB tresos Studio is the tool environment for our EB tresos AutoCore and EB tresos OsekCore. With its importer and generator interfaces, the tool fits perfectly into the AUTOSAR workflow and can be seamlessly integrated into existing tool-chains. This allows the integration of company-specific basic software modules and legacy software components.

Reliability based on standard compliance

EB tresos Studio is based on Eclipse, which makes it extendable with new user functions. Also, it allows development of carmaker- and Tier 1-owned modules.

Save time and effort

Users benefit from one tool environment for configuration, validation, and code generation instead of juggling multiple tools. Multithreading mechanisms are used to save time for code generation. Various assistant functions and wizards ease day-to-day work.

EB tresos Studio is the industry-standard tool for microcontroller abstraction layer (MCAL) development by semiconductor suppliers like NXP, STM, and Infineon. We are integrating the MCALs of the majority of hardware vendors, so that it can be configured with our tool.

To simplify the configuration of an ECU, EB tresos Studio provides several importers such as the System Description Importer, the DBC Importer, the Fibex Importer, and the LDF Importer. The importers configure the BSW automatically.

The Generic Configuration Editor is the graphical user interface through which developers may edit configurations for basic software modules that comply with the AUTOSAR standard. Also, third-party software like MCAL modules or carmaker-specific modules can be easily integrated and configured with EB tresos Studio.

EB tresos Studio provides step-by-step instructions using a guided workflow. The instructions guide the user through the configuration of the basic software. A workflow consists of a list of steps the ECU developer has to perform in order to accomplish a certain task, e.g., to set up a configuration project or to run an importer. EB tresos Studio also handles project-specific workflows, which are only shown in the context of a certain project. 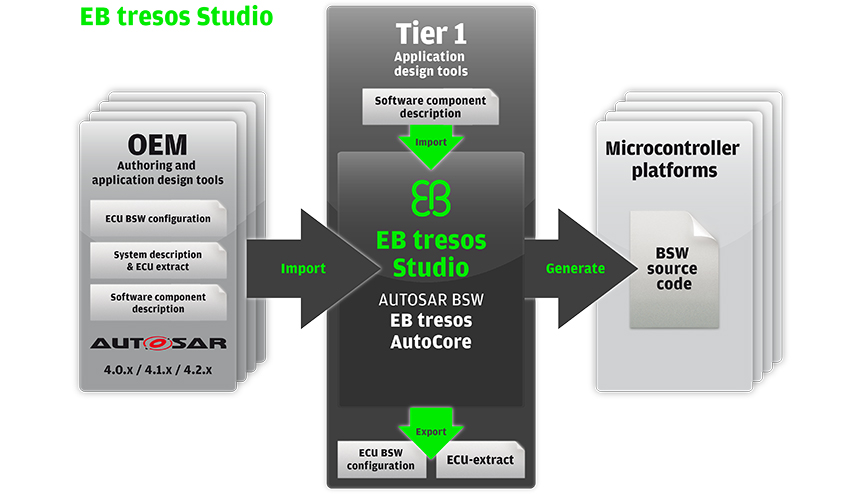 Integration with other EB products and technologies

Our basic software for AUTOSAR-compliant ECUs.

Our virtual AUTOSAR basic software, which runs on a Win32 platform.

Ready to use for automated ECU testing, e.g., rest bus simulation (RBS), software-/hardware-in-the-loop (SIL/HIL), end-of-line (EOL), or as an integral part of your production line.

Software for the automotive industry 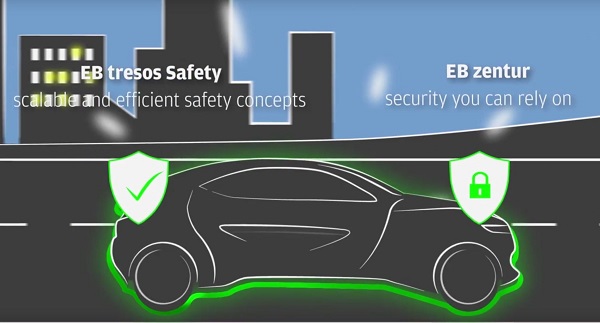 Request a demo, get technical specifications, and get support

Subscribe to our newsletter(s) and stay up-to-date on the latest products and news!